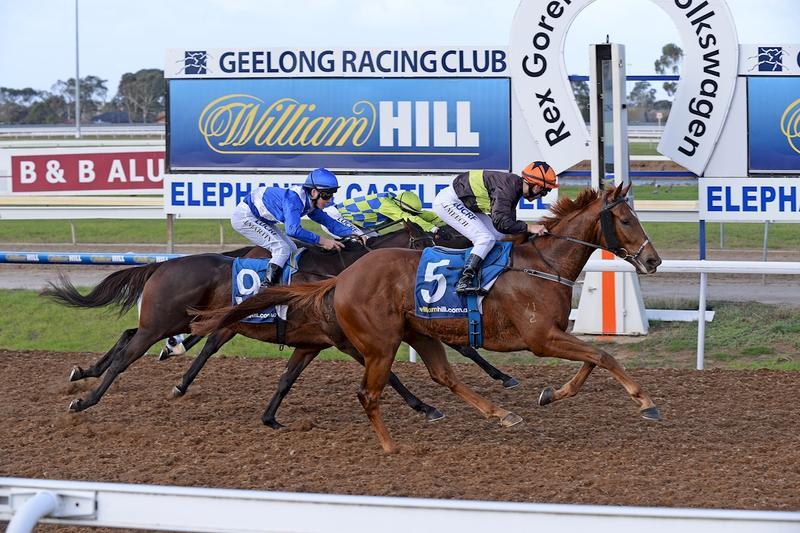 Lightly raced three-year-old Walled City is in for an exciting campaign if his unexpected win at Geelong is any guide.

Trainer Vincent Malady was lukewarm about the son of Duke of Marmalade’s chances first-up over 1200 metres on Tuesday but the gelding made it look easy, storming home from last to land the Buxton Real Estate Maiden Plate.

“His jump outs have been good but I didn’t really think he would win over 1200 metres,” Vincent said.

Formerly trained by Bart Cummings, Walled City finished last at his only public appearance in a barrier trial in April last year before last spring, in his first race campaign for Vincent, he showed promise, with a fourth placing his best of four runs.

“Last campaign he was obviously learning a lot,” Vincent said.

“He has always looked like he was going to need ground.”

Walled City ran on from the back in his all his runs last spring and the strong pace first-up at Geelong on Tuesday suited him.

After tailing out two lengths in the small field he made good ground from the rear in the home straight, showing a brilliant turn of foot the last 100 metres to mow down the leaders and score a half-length win over Ella Violet and Palazzo Pitti.

Meech, who returned this week from riding in Morocco, was pleased to be back on Walled City after finishing sixth on him last start at Hamilton in November.

“I’d had one ride on him and it just didn’t pan out that well, but they went pretty quick today at that suited him.

“He is a great big lump of a horse so I was happy to give galloping room and he hit the line nicely.”

The win not only caught Vincent by surprise but also punters with him paying $18.10 in the eight-horse field.

“I’m happy with his win but he is only a three-year-old and his breeding suggests he will get 2000 metres,” Vincent said.

He is the second winner from Giant’s Causeway mare Weekend in Manila while his grand-dam is a half-sister to six-time Group 1 winner Court Vision whose wins included the Breeders’ Cup Mile and Hollywood Derby.

His third dam is a sister to Kentucky Derby runner-up Summer Squall, who won the Preakness Stakes, and half-sister to 4-time Group 1 winner A. P. Indy whose victories included the Breeders’ Cup Classic and Santa Anita Derby.

“The is potential there on what he has shown us so far and fingers crossed he keeps improving,” Vincent said.

“He will get his chance as we progressively step him up in distance.”