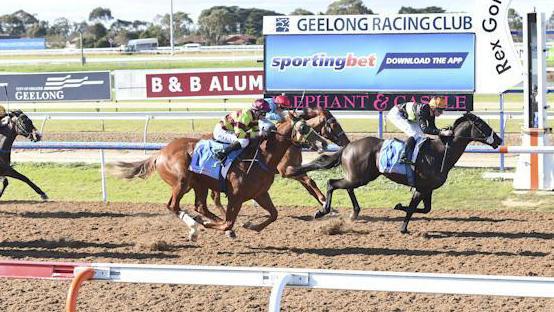 Well-bred gelding Tigidig Tigidig has hit the ground running posting his maiden win at just his second start for his new stable.

The rising four-year-old flagged better wins were ahead of him when he followed his encouraging third at Geelong last month to land Friday's Harvey's Of Highton Maiden Plate (1000m) on the synthetic track.

A slow maturer, Tigidig Tigidig showed some promise in his first four starts in Sydney with Gai Waterhouse, and his Geelong win came as no surprise to Cartwright, who has seen the horse develop this campaign.

"He was a bit lean and immature when he first came to Vinny's, but I rode him trackwork the other day and he is really starting build up into a nice horse," Cartwright said.

Cartwright rode a patient race from near last on the rails, and the gelding flashed home when he got away from the rail and into the clear the last 100 metres.

Despite a betting drift from $5 to $8, he was impressive hitting the line nearly a length ahead of Easy Best, with pacemaker Got The Wink close up third.

With such a pedigree, it was not hard to find new owners for Tigidig Tigidig and most of them are from Geelong, the group consisting of 20th Hole, Julie Duynhoven, Abel Freeman, Christine Hart, Simon Jarman, Georgina Malady, Hardache Syndicate, Nathan Panozzo, Mark Richards, Jeffrey Richards, Russell Schulz, Mark Sostheim, and Marita Wright.

Vincent hopes Tigidig Tigidig can measure up to 0-64 class next start and he plans to keep him fresh and limited to sprint distances to keep the condition on him.

"He's a three-year-old and still pretty immature but hopefully he will mature more over the next 12 months and keep improving," Vincent said.

"He is out of Don Eduardo mare so he should get further, and next preparation we will stretch him  out over a bit more of a trip."

Tigidig Tigidig ended two months of minor placings for the stable which just missed a winning double at Geelong on Friday when Bluegrass Dan ran a much improved race to finish second in the Wharf Shed Cafe 3YO Maiden Plate (1100m).

Vincent said the gelding might have got his tongue over the bit when he disappointed at Geelong last start in May, but wearing a tongue-tie appeared to help him finish a 1-3/4 length second to dual city placegetter Moment Of Design.

He said the three-year-old was getting better with racing.

"He has always shown a bit but just hasn't worked out how to put it together yet," he said.

Owner Ramon More bred Bluegrass Dan as well as the gelding's talented half sister Music At The Marsh, who he lost earlier this year to infection.