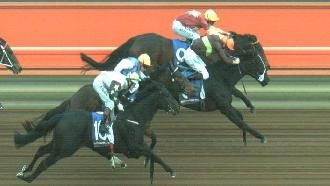 YOU could feel the anticipation build as Tigidig Tigidig threw out a challenge to Olivia’s Joy at the 250-metre mark in Friday’s Newtown & Chilwell FNC Hcp (1200m) at Geelong.

Could this be the day the four-year-old’s luckless streak would come to the end?

“It is the moment of truth for him,” Crettenden called as the horses closed in on the 200-metre peg.

The thought that he would run second for the eighth time in a row was unthinkable and punters latched on and made him $3.50 favourite.

As the post loomed Tigidig Tigidig edged closer and closer with jockey Jamie Mott throwing everything at him, pushing him forward on the line with a desperate last stride lunge.

Crettenden declared Tigidig Tigidig had got there a nose but the judge was not so generous.

He couldn’t find a margin between Olivia’s Joy and Tigidig Tigidig and declared a dead-heat.

“I thought he might have got there but you just never know when it is that close,” Vincent said.

Vincent admires the fighting qualities of Tigidig Tigidig who despite his frustrating drought has always dug in and given his best.

“He keeps finding the line.

"People thought that he is a bit of a cheat but I don’t think so, he’s just had bad luck.

“Leading last start wasn’t the best idea and back to sitting off them today he found the line again.”

Jockey Jamie Mott, who has partnered Tigidig Tigidig in four of his seven second placings this campaign, had him perfectly placed just off the pace on Friday, and noted the gelding’s courage.