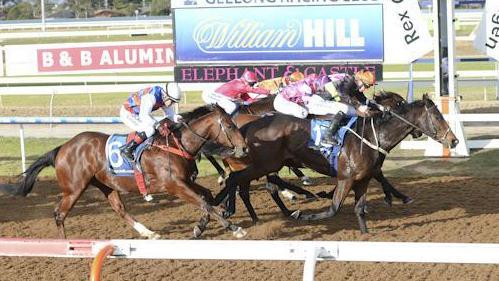 NOTED “miler” Surfside wiped out punters with a barnstorming finish to claim a major upset sprint win at Geelong on Tuesday.

Tailed off two lengths last on the home turn, the Rock Of Gibraltar gelding charged through the field in the home straight to get up in the last stride in the Hyland Sportswear Hcp (1200m).

Not even trainer Vincent Malady was prepared for the win.

“I was surprised as we always thought he was a miler,” said Vincent.

“His four wins for us have all been at 1600-metres so to see him win like he did over 1200m was really unexpected.”

Surfside scored by a head from Costa Plenty in a blanket finish with 0.7 lengths separating the first seven place-getters.

“It was good the horse won, but it’s a pity he paid $52 and I didn’t have anything on him,” Vincent lamented.

He said the victory was very encouraging as Surfside had been gaining fitness in the sprints in preparation for 1600-metre races.

It is the first campaign the six-year-old has been tried in races under 1300-metres and he has been revelation.

First-up he ran unexpectedly well at big odds when a 1.8-length fourth over 1100 metres before closing from the back without threat last start at Geelong over 1200-metres on May 15.

“He is a nice horse and he may go on a bit this preparation,” Vincent said.

“It was  nice surprise, that’s for sure,” Thornton said.

“On paper you wouldn’t have expected too much until he got out over a bit more ground but he finished off really well to win.”