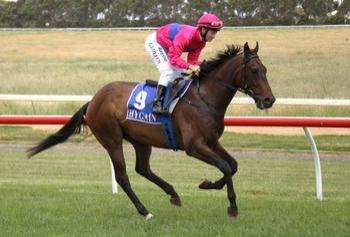 NEW riding tactics and a gear change have revived the fortunes of comeback galloper Providence who came from last to score in the last stride at Benalla on October 6.

The six-year-old normally races on-pace but when he struggled to the line at previous start at Geelong, trainer Vin Malady went back to basics and took advice from jockey Linda Meech.

“We gave him a trial to see where he was at and Linda came in and said he is going too hard, put a Norton bit on him and give her a go riding him cold,” Vin said.

At Benalla Providence settled last and sustained a winning run four-wide from the 700 metres.

He was four lengths off the lead straightening up and flew over the last 200 metres to win in tricky photo finish, with three horses hitting the line together.

Meech said she thought Providence had won but feared she was wrong when the race caller Rick McIntosh went for Dad Knows Best, who also ran on strongly.

“I was really confident until I heard Rick got for the other horse,” Meech said. Get’s Better was centimetres away in third place.

Providence’s win in the  Exton's Earthmoving BM64 Hcp (1206m) at Benalla was his first success since returning from more than a year off because of a tendon injury.

“He does show a little bit of ability, and now he is he his hitting the line well we will take him up a bit in distance,” Vin said.