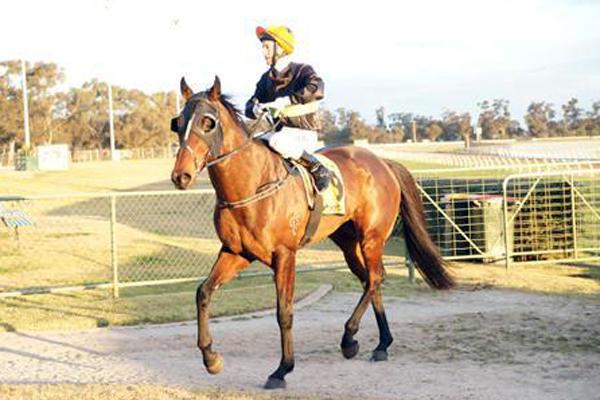 "It was a big day for the stable where the stars aligned for us," said Vincent who has celebrated up to three other raceday doubles.

Heavily backed favourite Holy Heart ($2.40) romped home by nearly five lengths, but Surfside ($6) gave his supporters a big scare when he was tailed off early in the race.

Stewards reported that the gelding blew the start when he dropped his head and unbalanced jockey Daniel Stackhouse in the Rednic Rock 0-58 Handicap (1600m).

As a result, Surfside didn't tack on to the field until the 800 metres.

Stackhouse stayed cool and rode for luck on the rails rounding the home turn, and somehow threaded his way through a wall of horses in the straight.

He found clear running when hooked out three off the fence with 150 metres to go and just as the race caller was picking through up to six possible winners, Surfside ($6) wiped them out with a sudden burst to score by a long neck from Paradou ($6) and Bullion Express ($9).

Vincent said Surfside had been a hit and miss horse throughout his career, winning four of his 20 starts without a minor placing.

"He is one of those horses whose form chops and changes and we made the mistake last preparation of reacting to that and altering his training program," Vincent said.

"This campaign we have stuck to the same routine with him, no matter what, and put faith in the horse that he will deliver which he has done two of last four starts."

Surfside was an impressive winner over 1600 metres at Swan Hill four runs back and had excuses at his next two runs when unplaced at Kilmore and Ararat.

"At Kilmore he drew a wide barrier and went back but there was no pace on and it made very hard to make ground, while at Ararat the jockey circled the field on him mid-race which was never going to work."

Vincent is reluctant to change much with Surfside but his strong finish at Murtoa has him thinking about longer races.

"We've kept him at a mile for a fair while, but now I'm tempted to go up in distance a little bit after the way he hit the line at Murtoa," Vincent said.

He is confident Surfside will handle a rise in class next start.