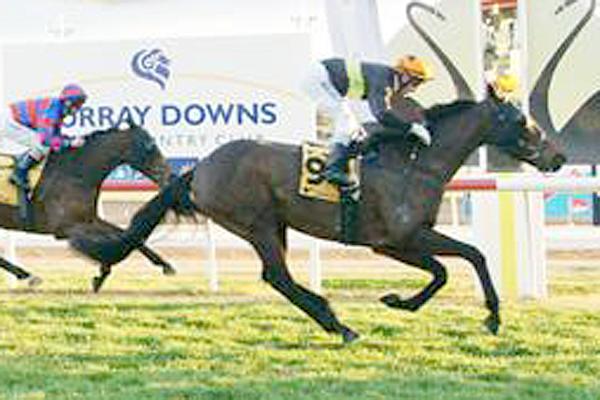 SURFSIDE and Meteoric gave trainer Vin Malady his first quinella in memory when they fought on the finish of the last race at Swan Hill on Monday.

Vin couldn't remember the last time he had trained a quinella, if ever, with Surfside ($15) upstaging his more fancied stable mate Meteoric, who was heavily backed from $6 to $4.20 favourite, by 1-1/4 lengths in the Swan Hill Bus Lines 0 – 58 Handicap (1604m).

"I rarely have two horses in the same race so it might be my first quinella," Vin said.

"It is a pity they had to clash but we ran both horses because it was a suitable race for each of them."

"Surfside needs a bit of galloping room so Jack Hill came wide while (Craig) Robertson rode Meteoric like he normally does, smothering him up and riding for a bit of luck so he could finish off."

Surfside raced off the fence and peeled wider on the home turn to make his winning run down the centre of the track, taking the lead near the 100m, while Meteoric chased valiantly nearer the rails, taking a gap between runners the last 200 metres.

Vin said had been marking time with Surfside until the right 1600-metre race on firm ground came along for him.

"Monday was really the first suitable race he has been in this campaign," Vin said.

"He needs a mile and a dry track but with the wet tracks this winter I have been ticking him over in 1300-metre races on the synthetic at Geelong, keeping him sharp.

Surfside's other two wins were over 1600m at Ararat and Hamilton in April last year.

"I stuffed up his training last year and made him too dour, but we are on track now," Vin said.

Meteoric has threatened to win a race with three seconds, a third and two fourths in nine runs since joining the Malady stable from Sydney,  and Vin is confident a breakthrough his coming.

"He has raced consistently all year and he's going to win a race soon," Vin predicted.

Meteoric has an army of owners and they will be hopeful their patience will be rewarded when the gelding has his next start in a 1700-metre race at Warrnambool on August 25.

Surfside needs to improve with his 60 rating to be competitive in the 0-64 class, and his owners Leigh Booth, Christian Lister, Will McTaggart, Alan Patterson, Greg Pell, Terry Scanlon, and Paul Toleman will be keen for the fun to continue.