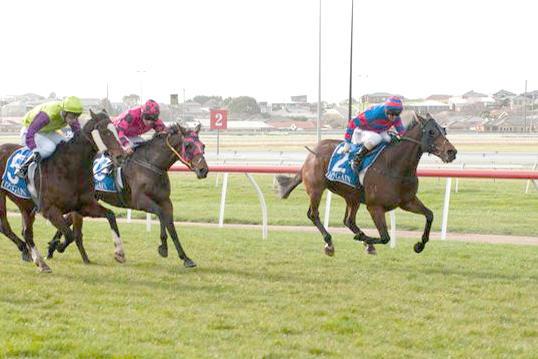 Jockey Craig Robertson enhanced an impressive partnership with a last to first performance on Meteoric at Warrnambool on Saturday.

Robertson posted his second win on the son of Fastnet Rock in the Callaghan Motors 0-58 Hcp (1700m) after steering to him victory three starts earlier at Warracknabeal on June 13.

He has now ridden Meteoric nine times and only missed a place on him twice. Four times he has finished second and he has also posted a third and a fourth.

The win was a great start to the new season for the Vincent Malady stable which had a record-breaking last 12 months with 15 wins.

Trainer Vincent Malady said Robertson understands Meteoric racing style and gets the best out of him.

“This is the horse’s second preparation with us and he has won twice, both times with Craig on board,” Vincent said.

“Craig has a knack with him. He knows to have him smothered up and save him up for final sprint.”

On Saturday race caller Rick McIntosh expressed his doubts about the winning chances of the six-year-old when he was still at the tail of the field at the 500 metres, declaring he “didn’t appear to be travelling that flash.”

However within a few strides the gelding improved quickly on the rails, saving a lot of ground, and was just a couple of lengths behind the leaders turning for home.

Meteoric got a run through three-wide in the straight and sustaining his sprint, took the lead at the 100 metres to score a neck win over Monte Carlo and Tons Of Dash.

Robertson’s ground-saving ride was telling, but also the drop back in class from BM64’s at his two previous runs was helpful as was the heavy track.

Meteoric has started on heavy ground six times for a win and four placings and Vincent is hopeful the rain will stay around for a while.

“This is the best time of the year for him and hopefully Craig will be available to keep riding him,” Vincent said.