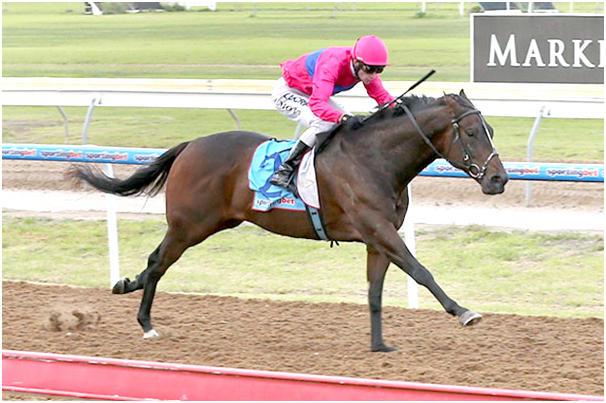 IMPROVING galloper Providence led the charge when scored at Geelong on a day when the stable went close to landing a treble across two race meetings on Sunday.

Vincent Malady missed the Geelong meeting as he was at Echuca where he saddled up another second placegetter Meteoric in the Shamrock Hotel Echuca Handicap (1618m).

“It could have been a really good day if all three had won,” Vincent said.

Providence had been luckless at his first two runs this campaign but the cards fell in to place on Sunday.

He had finished off strongly from a wide draw first up at Benalla and again at Echuca after being cut off at the start, but with a better barrier draw and better fortune jockey Jamie Mott was able to ride the gelding more positively at Geelong.

After beginning in front Providence took a sit in second place, two lengths behind the leader, and peeled out down the side of the track to share the lead on the home turn.

The six-year-old broke two lengths clear at the 200 metres and went to the line strongly to score by 1-3/4 lengths from heavily backed $3 favourite Let’s Be Famous.

Providence was a maiden after three starts when he transferred from Sydney to the Malady stable and has now won four of his 20 outings.

Providence bowed a tendon in June two years ago and much of his training is done at the beach.

“We don’t want to over tax him and the beach is perfect for him,” Vincent said.

He said he wanted to avoid the slow and heavy tracks with the son of God’s Own, and that Geelong’s synthetic track was a perfect  winter track for him.

He has won up to a mile but we will just keep him fresh and target 1300-metre races with him on his home track,” Vincent said.

He said the Geelong Synthetic Final maybe a target in July.

“It is still a way off  but if he keeps improving it would be nice to aim him at it,” Vincent said.

With his latest win Providence lifted his rating from 63 to 67 and hopefully he will give his owners John Carlon, Patrick Connolly, Jason Dudley, Jamie Eales, Leonard and  Mary Leahy, 19th Hole (Mgr: Wayne Bogan), Mark Richards, Daniel Stubbs, and Bernard Vallence even more to celebrate in the coming months.