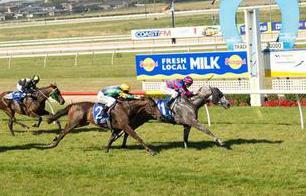 FRUSTRATING galloper Platinum Panther rewarded the patience of the local “Boys From The Hill” syndicate with an overdue win at Warrnambool.

The flashy grey had been slow from the barriers at recent starts but got his act together when he jumped away with the field to land the Jason Bilson Trendset Kitchens 0 – 58 Hcp (1200m) on January 13.

Despite a wide gate and racing three deep, Linda Meech had Platinum Panther running third before the son of Danerich pounced with a strong burst to beat Illusionary Star by a long neck.

Platinum Panther’s only other win was at Geelong on Boxing Day in 2012, but he has been an unlucky horse with seven second placings in his 22-start career.

“He probably should have a better record, but he's had some wear and tear issues that haven’t helped him, and he has missed the start a few times lately,” Vin Malady said.

Platinum Panther flagged his Warrnambool success at his previous outing last month at Terang when he was checked at the start and flashed home from last to finish fourth, just a 1.2 lengths from the winner.

In recent times Vin has adopted a cautious approach with the five-year-old gelding, scratching him twice from Ararat and Sale to avoid hard tracks.

”It is good to finally get another win with Platinum Panther for the owners who have been so patient,” Vin said.

“He is still eligible for similar class races (0-58) and hopefully the horse and the owners can get a run of luck from here.”