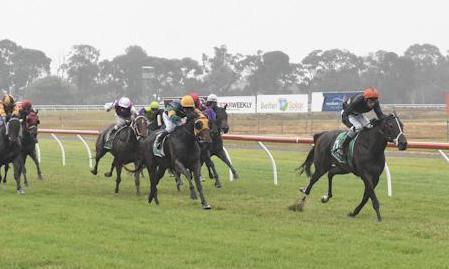 MONTHS of careful preparation paid off when stable pet Nowhere Man made a sensational return to racing at Werribee on Friday.

Having his first start since suffering  a bleeding attack winning his maiden at Casterton in September last year, the six-year-old posted a dominant victory in The Big Cat Fight Werribee v Geelong Tonight 0 – 58 Hcp (1115m) on April 17.

Ridden by Jamie Mott, the son of Mookta travelled well on the soft ground in second place, five lengths behind the tear-away leader Bon Jovial, but had him covered approaching the 200 metres, charging away to an easy 1-3/4 length win.

The result was a relief for Vincent and his staff who race the gelding in partnership with Vincent’s training assistant Samantha Jeffreys who bred the horse they have nicknamed Skittles.

“He is a real stable pet and most of the staff have an interest in him,” Vincent said.

Office manager Kylie Dudley is among the partners along with her husband Jason, Alison Rotherham, Norm Dowie, Raymond and Sarah Jeffreys, and Vincent’s brother Samuel, who all help out around the stable.

“The horse has been great fun for all of the team and it was good to see him come back after a bleeding attack and win like he did,” Vincent said.

“There was definitely a concern about how he would go under pressure after having had a bleeding attack at his last start, but we gave him a slow build up over a few months and basically let him tell us when he was right to go back to the races,” Vincent said.

“Jamie (Mott) trialled him in front of the stewards about three weeks ago and he pulled up well, and will be fitter again for his first-up run.”

Vincent was particularly pleased with the way Nowhere Man handled the soft Werribee track which was bordering on heavy by the time he raced on Friday.

“His real strength appears to be his ability to handle wet tracks and hopefully he has a good winter ahead of him.”