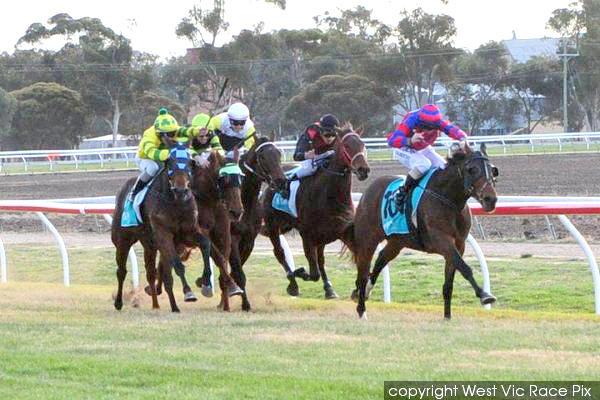 METEORIC rewarded the patience of his owners when he won his first race since joining the stable more than a year ago.

The five-year-old has been remarkably consistent without winning but the stars aligned for him at Warracknabeal on Saturday when he charged home to a 1-1/4 length victory in the ThnkU2 Wbeal Racing Committee 0-58 Hcp (1600m).

Jockey Craig Robertson had the Fastnet Rock gelding beautifully placed on the rails midfield and after weighing up his options approaching the home turn, plotted a course four-wide into the straight.

Within a few strides Meteoric raced up to the leaders and forged clear over the last 100 metres to score an overdue win from Antrim Glen.

Meteoric’s only other win was a 1350-metre maiden at Wyong in April 2013 when he Gai Waterhouse trained him.

He has placed at seven of his 15 starts with the Malady stable, with a win, four seconds and two thirds.

He was peaking for Saturday's assignment after three runs this campaign, his previous when he loomed up to win but faded on the rails the last 100 metres on a very heavy track at Hamilton on June 1.

“At Hamilton he was five weeks between runs and just ran out of steam,” Vincent said.

“It was good to see him finally win one on Saturday as he has been pretty consistent.

“He deserved it and hopefully it will give him a bit confidence.”

Vincent also expects a wet winter will suit him.

“This is the right time of the year to have him racing as he loves the heavy tracks,” Vincent said.

Vincent is also optimistic he will handle the rise in grade in the coming weeks.

“He now has a 60-rating but he has run well at Benchmark 64 level in the past.

"Last July at a mid-week meeting at Bendigo he finished a close fourth on a heavy track so hopefully he can find that sort of form again.”