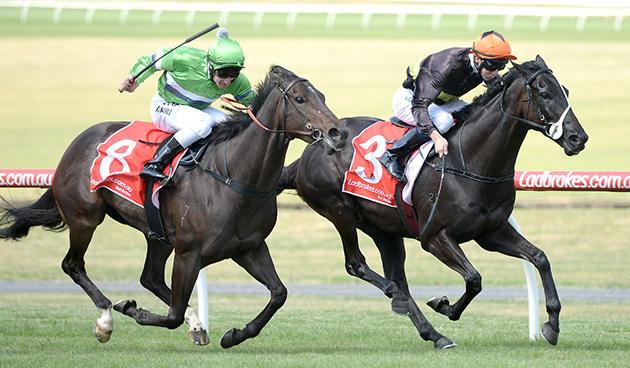 GEELONG'S reigning Most Popular Racehorse Tigidig Tigidig is building a reputation as Australia’s unluckiest galloper after being disqualified as the winner of Wednesday’s $35,000 Ladbrokes Cash In Hcp (1200m).

After running a series of seconds in his last campaign, his connections were dealt a cruel blow when the Vincent Malady-trained five-year-old finally managed to land an outright win at Sandown only to have the race taken him off him after apprentice Jye McNeil weighed in 600 grams light.

Stewards were unable to pinpoint the reason for the weight discrepancy, clearing Vincent of any blame, but issued McNeil with a $2000 fine.

Despite racing three-wide, Tigidig Tigidig posted a long-neck win ahead of Foreign Affair, who was later promoted to first.

McNeil told stewards he was unable to explain why he weighed out correctly but returned to scale weighing 600 grams lighter.

Had McNeil been within 500 grams of the correct weight, Tigidig Tigidig would have kept the race.

Vincent said it was very disappointing to lose the race because of a mere 100 grams and he felt for the owners who had raced the horse in good faith.

He said he was at a loss to explain how the horse could weigh in light when “all the gear was on the horse.”

“The only explanation is that there was a breakdown somewhere at the weighing out area.”

Vincent was unable to call for the bridle to be included in the weight after a change of rules several years ago.

“I believe the horse would have actually carried the weight when you add the leather bridle and the cheekers and the bit.

“He was only 0.1kg under and I don’t think that would have affected the result.

“I think in these situations for both punters and owners a bit of common sense should prevail and you should be able to call for the bridle.”

Last season Tigidig Tigidig finished second in seven consecutive race starts, only to end the sequence with a dead-heat for first at Geelong in May this year. He posted his ninth second placing for the season at his following race start.

He has raced 20 times for two wins, including a dead-heat, nine seconds and two thirds.