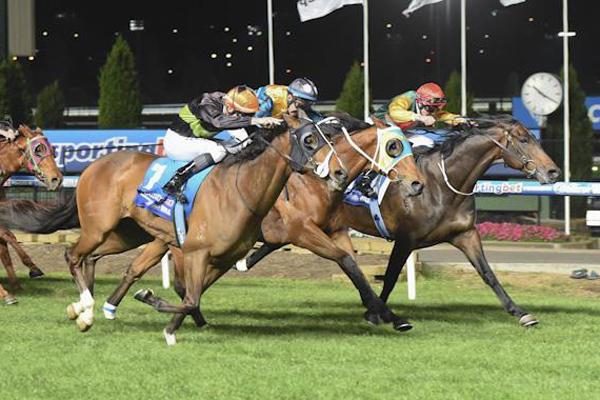 RACECALLER Greg Miles barely had time to spit out the words, "Holy Heart" as the six-year-old unwound an explosive finishing burst to give apprentice Josh Cartwright his "proudest moment" in racing at Moonee Valley on Friday night.

The rejuvenated sprinter enjoyed a hot pace and defied the outside barrier with a smart ride from Cartwright to land the Sportingbet Powered By William Hill Hcp (1200m).

After drifting back to second last, Josh bided his time three-wide with cover before peeling out wider on the turn and Holy Heart did the rest.

In clear running, the gelding made up four lengths in the last 100 metres to nail an unlikely win in a three-way photo finish from Magnus Effect and pacemaker Bishop's Castle.

Cartwright has been a big part of Holy Heart's racing career, riding him 16 of his 33 starts, and described the sprinter's first city victory as "probably my most emotional win ever."

"Words cannot describe how happy I was to win on my favourite horse (Rocky) Holy Heart tonight," Josh wrote on his Facebook page.

"By far my proudest win to date and to ride a winner for my good friend and also one of my biggest supporters Vincent Malady makes it even better.

Vincent knew the odds were stacked against Holy Heart when he drew the outside gate in the 12-horse and was banking on Cartwright's three kilo claim and knowledge of the horse to help offset the disadvantage.

"I was very worried about the barrier," Vincent said.

"I just said to Josh, forget everything, just go back and if there is a heap of speed on you might be able to finish off over them; other than that you can’t win."

Holy Heart has won seven of his 33 starts and notably six of 32 since transferring to the Malady stable in mid-2012.

That spring he won four races in a row, three of them with Cartwright in the saddle.

Holy Heart twice placed in the city at Sandown, but it was not until three starts ago that he posted his first win in nearly two years, scoring by nearly five lengths at Murtoa when ridden by Cartwright and racing in blinkers for the first time.

Next start at Bendigo he flagged his Moonee Valley win with a photo finish second to General Groove, who franked the form winning on Melbourne Cup Day at Flemington and finishing second in the Group 3 Sandown Stakes on November 15.

"The horse's form tapered off for a long time, but the owners stuck with me and the horse," Vincent said.

"We saved him up for blinkers and he has improved a heap since we put them on three starts ago."