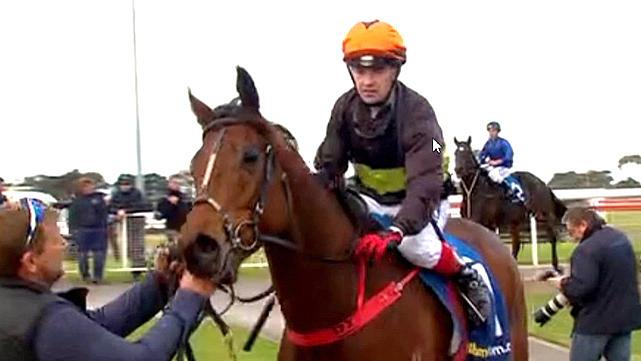 SIX-year-old Harold Bluetooth is still finding a way to win as he prepares for retirement.

One of the stable favourites, “Harry” is likely to finish up his career at the end of this campaign but is still showing plenty of zest for racing.

At his last two runs he has relished the drop back to 0-58 class, bouncing off a last start second on his home track to land the Veli Velisha Hcp (1000m) at Geelong on Friday, May 29.

“It has taken a while for his rating to drop but I think getting back to 0-58 class has been the key to him,” said trainer Vincent Malady.

Since scoring in 0-64 class at Terang in March last year, Harold Bluetooth has had 10 starts in BM70 and 0-64 races for one placing.

“We had hopes that back in the right class he would snag another win and everything worked out on Friday with him being able to sit off a strong pace,” Vincent said.

Ridden by Dean Yendall, Harold Bluetooth ($7.50) settled second, three lengths astern of Bring Me Sunshine who he collared at the top of the straight.

“Harry” was still a length clear at the 100 metres and while getting tired towards the line held off a late charge from $3 favourite Howdee to score a half-length victory.

“It was his first win for 14 months so hopefully it gives him some confidence and he can win one or two more before he retires,” Vincent said.

“More than likely this will be his last preparation.

“He takes a little while to come up each campaign and he carries a few little niggles so want to look after him.”

He has won four of his 24 starts and placed another five times for earnings of more than $53,000.