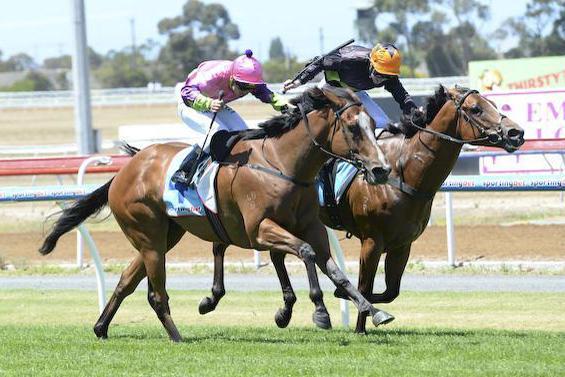 WITHOUT a fly in sight, Harold Bluetooth staged a stunning form reversal to post his second career win at Geelong.

At his previous start, Harry had finished last when resuming at Geelong’s Boxing Day meeting but there was good reason for the failure as his jockey Jason Benbow told stewards he was unable to ride his mount out because of a coughing fit when he swallowed a fly.

The incident was duly reported in the stewards report, but punters were unconvinced Harold Bluetooth could win his next start when he drifted from $7 to $10 before taking out the Rex Gorell Volkswagen 0 – 58 Handicap (1100m) at Geelong on January 22.

The highly promising Shot Caller, who was a luckless third at its only start in December 2012, dominated betting and was backed from $1.70 to $1.60.

Harold Bluetooth’s rider Linda Meech was understandably wary of the odds-on favourite and thought the only way to beat him was to make it a tough sprinting test in the six-horse field.

After setting a hot early pace and establishing a handy lead, Meech gave the five-year-old a breather before the home turn.

As expected Shot Caller loomed up and challenged strongly in the home straight but Harold Bluetooth kicked and refused to be beaten in the two-horse battle over the last 200 metres.

The official margin was a nose with barely a discernible margin on the photo finish print.

“He was spot on today,” said Meech, who lives at nearby Freshwater Creek.

“I came in and rode him at Geelong last Saturday morning to give him a bit of burn around, and Vinny and Sam (Jeffreys) had him cherry ripe for today.

“I was thinking the second horse (Shot Caller) was the one to beat and, with it first up after more than 12 months, I thought the only way of really beating it was to beat it with fitness.”

Vin was relieved to see the son of Danerich return to the winner’s enclosure for his second victory in just 10 starts.

“Linda rode him well, and the horse really fought it out well when he was challenged,” Vin said.

Harold Bluetooth ’s rating jumped from 58 to 62 with the victory and Vin will now look to place him in a 0-64 race early next month.