Escadrille quick off the mark with new stable 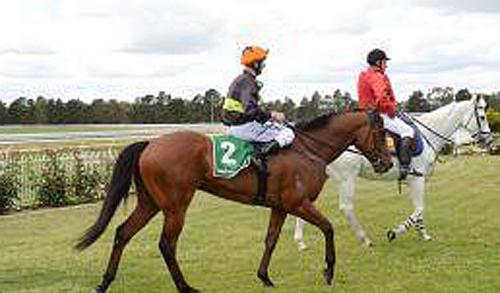 FORMER Sydney galloper Escadrille is quickly making his mark with Malady Racing.
A $160,000 yearling, he finished out of the money at his first three starts as a three-year-old on New South Wales tracks but with a staying pedigree and given extra time is starting to realise his potential.
The four-year-old placed at his first three runs for his new stable at Donald, Kilmore and Swan Hill before landing his maiden over 1600 metres in good style at Ararat on November 10.
Jockey Brad Rawiller gave Escadrille the run of the race on the rails behind the leader and urged him clear in the last 50 metres to score a length victory over Vernon in the Gorst Rural Supplies Maiden Plate.
“He is bred to stay and has taken a bit of time, but hopefully he can progress for here,” Vin Malady said.
Escadrille is son of Bernardini whose progeny include dual Group One winning Epsom Hcp and Emirates Stakes winner Boban, another top miler Toydini, and Geelong Classic winner Solemn.
Escadrille should get extra stamina from his dam Dakasha, winner of the 2005 Launceston Cup.
“If he is going to go on he has to run 2000 metres or more, and his breeding suggests he will,” Malady said.
“We will keep stepping him up in distance and who knows what he might do.”
Most of his owners live in Geelong and they are getting a bit of fun out of him which we hope will continue.”