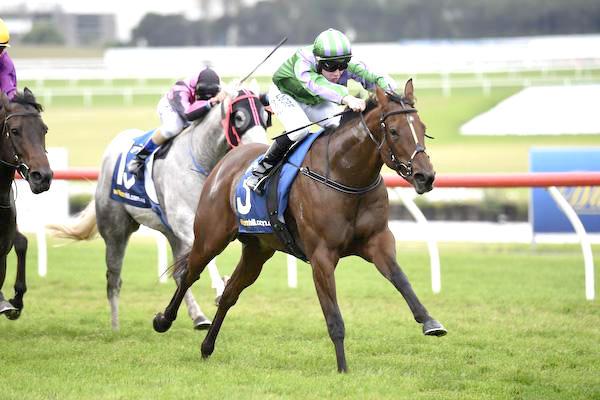 VINCENT Malady kept a lid on the expectations of Appalachian Annie following a sensational jump out at Geelong two weeks ago, but it didn’t stop punters smashing her odds before a blistering win at Sandown on Wednesday.

The Blevic three-year-old officially started at $4 after she was earlier backed from $13 to $3.20 as a video of her very easy Geelong jump out win on the synthetic track in 57.5s on March 18 was widely circulated.

“I didn’t want to talk her up too much before the race because you don’t want to put the mozz on them and look like an idiot, but she won a jump out by about 15 lengths two weeks ago so we knew she would be thereabouts,” Vincent said.

Apprentice Patrick Moloney said Appalachian Annie gave him a tough time when she fought him going to the barriers but once the race was on she was never going to lose, despite her wide gate.

From barrier 12 she jumped brilliantly and led, and Moloney followed instructions to the letter with the promise that he would ride her again if he did a good job.

“I said to Patrick that she needs learn how to race as she is a very fierce going filly and that if he just sat on her she would tow him forward and hit the line,” Vincent said.

“The way she was travelling and the way she felt underneath me I knew she had more gears,” Moloney said.

“She has still got a lot to learn but when I really popped the question to her (at the 300m) she found again off that high cruising speed.

“She got a little bit wayward (drifting out) the last 50m but she has got plenty of talent.”

While not much bigger than 15 hands, Appalachian Annie ran the 1000m in a slick 56.61s and was too fast for second placed Chiavari, scoring by 1-1/4 lengths.

No one was more pleased with Appalachian Annie’s Sandown win than Vincent’s training assistant Samantha Jeffreys, who rides her all her work and has been so important in the filly’s development.

“She is not an easy filly to ride as she goes hard in her work so Sam gets her out early when there is not much activity at the track to help her relax.”

Owner and breeder Ramon More is enjoying the ride with Appalachian Annie who is a sister to two other Malady-trained winners Music At The Marsh and Bluegrass Dan.

“The good thing is I still own the mare and I still have three at home from her by Lago Delight,” Ramon said.

Appalachian Annie is likely to have her next start at Flemington in a BM70 three-year-old fillies (1000m) race on Anzac Day.