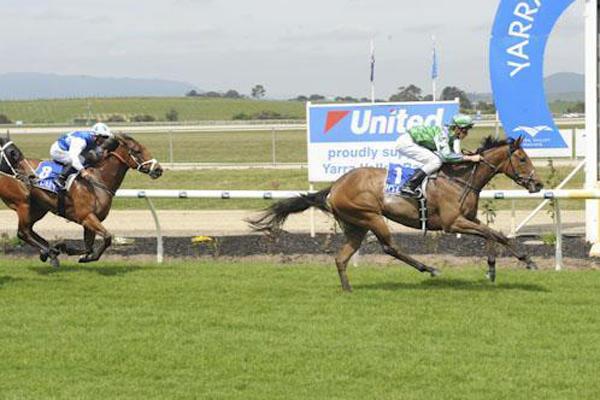 EXCITING filly Appalachian Annie may be heading to the city next start after scoring an outstanding debut win at Yarra Valley on Saturday.

Unwanted in betting at $18, the three-year-old caught punters unaware, defying the outside barrier and running slick time scoring an easy two-length victory in the Hugh “The Big P” Doyle 3YO Fillies Maiden Plate (1000m).

Ridden by apprentice Regan Bayliss, Appalachian Annie began well and raced very wide for 350 metres to the first turn, and then crossed outside the leader Sheree.

Held together, she was a close second approaching home turn and moved up to share to the lead straightening up before charging away the last 150 metres to win in 57.5s.

City-placed Sheree held on to finish second just ahead of another city-performed filly Top Dolly.

Despite the big odds, the win came as no surprise to those close to the Malady Racing stable who had watched Appalachian Annie's trial performances.

Most recently, she led up seasoned sprinters in a jump out at Geelong, and finished a close second.

"We will see how she gets over this run and then may be look at a metro race with her," Vincent said.

Owner Ramon More is keen to see her race in town, especially as he bred the filly and lost her talented full sister Music At The Marsh to an infection in July last year.

Appalachian Annie is the third runner from Danetime mare Bluegrass Danni who was an unraced half sister to star Scenic galloper Marasco, a winner of 16 races, including 11 feature events.

Vincent said Appalachian Annie had always impressed Samantha Jeffreys who rides her work, and likened her to Music At The Marsh who raced four times for a win and two seconds.

"Samantha liked her the first time she rode her," Vincent said.

"She is a very professional filly and has a good attitude which is a big asset.

"She's done everything we have asked her and has progressed really well."