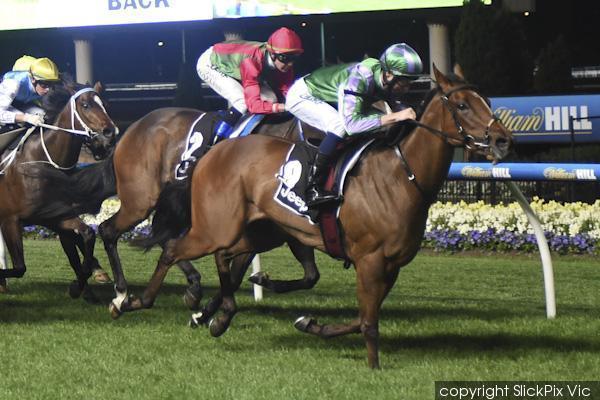 VINCENT Malady always suspected that Moonee Valley was the track for Appalachian Annie and last night she proved it with a stunning finishing burst to land the Jeep 55 Second Challenge Heat 4 (955m) .

With the pace burning up front, Jye McNeil opted out of a speed contest and bided his time three wide with cover, just over two lengths off the leaders, before peeling out four-wide to make his run.

Soon after entering the home straight the $4.20 favourite had the race in her control and storming up the centre of the track raced clear to score by a length from Glowstick ($20) and Steel Trigger ($7).

Owner-breeder Ramon More was thrilled with Appalachian Annie’s success, which was her third win in only six starts, and he praised McNeil for his patient ride which ultimately won her the race.

“He did the right thing and it was encouraging to see her take a sit and finish off like that,” Ramon said.

Vincent had been looking for the right Moonee Valley race for Appalachian Annie since her race debut win at Yarra Valley a year ago and last night was her first start at the track.

“I just think these tight little tracks where she can scoot around the corners (suit her best),” Vincent said.

“Places like Flemington – I don’t think that’s her go.”

Vincent described Appalachian Annie as “very temperamental” and that freshening her up with some equestrian training had been an important part of getting her mentally right.

“We just had to pull up stumps last prep because she was a lunatic going to the barriers at Flemington.

“We just thought we’d cooked her head so we tipped her out and just did a lot of dressage work with her, took her to the beach.

“She’s still a bit of a handful going to the barriers but she’s a lot better now.”

Vincent will wait before deciding on her next assignment but he is sure to be having a close look at the upcoming Moonee Valley programs.

“We’ve had to be patient with her and hopefully she can go on a little bit,” Vincent said.