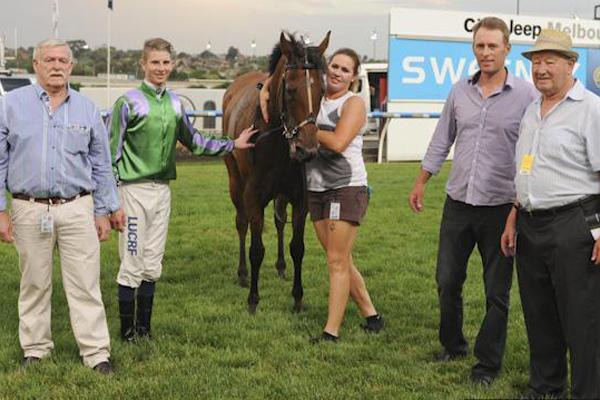 SPEEDSTER Appalachian Annie bounced back from a foot injury to keep her Moonee Valley record intact with a strong front-running performance on Friday night.

Ridden by apprentice Jye McNeil, the four-year-old mare posted her third city win and her second at the Valley in the Sweeney Estate Agents BM78 Fillies and Mares Hcp (1000m).

Trainer Vincent Malady said he had been unable to run Appalachian Annie since her last start win at Moonee Valley on October 30 because of a sore heel.

“We scratched her a couple of weeks ago from Moonee Valley because of the heel, but she is back to her best now,” Vincent said.

At her first Moonee Valley start Appalachian Annie was ridden off the pace from a wide barrier, but at her latest run she was able to take advantage of barrier three and bounced straight to the lead.

She beat off hot favourite Aunty Mo on the home turn and straightened up two lengths in front with the race in her keeping, beating Grand Gallop by 1-1-/4 lengths with Simply Ming three-quarters of a length away in third place.

McNeil’s has a perfect record on Appalachian Annie from two rides.

“Last start at Moonee Valley we drew out in ordinary barrier and had to take a sit, but tonight, the way she went to the front and travelled I just tried to rate her as best I could and she was just too good,” McNeil said.

Owned and bred by Ramon More, Appalachian Annie has now won four of her seven starts, with her other two wins being at Yarra Valley and Sandown at her first two starts in October last year and April this year.

Her only two unplaced runs were at Caulfield and Flemington, and Vincent is no hurry to take her back to those tracks.

“Moonee Valley is her track and there are plenty of meetings coming up,” Vincent said.

“We will stick to these sorts of races and there is an open class mares Jeep 55 Second Challenge heat over 955 metres in a month’s time that we will have a look at.”

Appalachian Annie won a heat in 55.79s, but the series leader is Tuscan Sling who ran 54.9s in the first heat in September.

The trainer of the fastest winner of the series will win a $70,000 Jeep Grand Cherokee and Vincent is hopeful that Appalachian Annie can give him a serious crack at it.