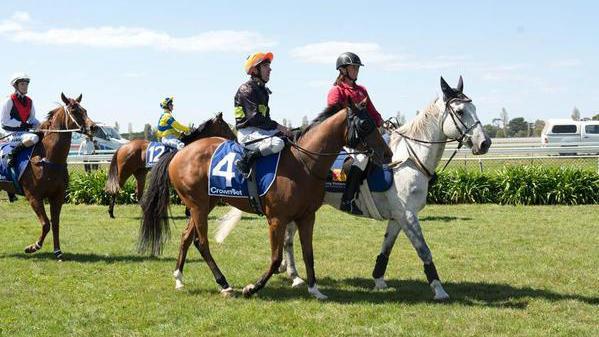 LIGHTLY raced gelding Strength Of Spirit gave his backers plenty of concern before charging home for an impressive win at Camperdown on Saturday.

Jockey Alan Creighton called on Strength Of Spirit to improve his position approaching the home turn and as the field fanned entering the straight, the gelding barged through and charged clear over the last 100 metres.

Wayne, Rodney, and Darryl were also among the part-owners of the Malady-trained Geelong Racehorse of the Year Twiginthedesert, who won the title in 2010, the year that Strength of Spirit was born.

Strength of Spirit is the first foal from Jetball mare Scandia’s Star and she was carrying Strength Of Spirit when Wayne Testro bought her for $4,500 at the Inglis Great Southern Bloodstock Sale in May 2010.

However it was not until August last year that Strength Of Spirit made his unplaced race debut at Geelong.

Clearly needing time, he was spelled and this campaign finished out of the money another three times before blinkers brought out the best and worst in him at Camperdown.

Trainer Vincent Malady attributed Strength Of Spirit’s tardy start to the gear change, but he may not have won without blinkers.

“He was racing in them for the first time and being drawn barrier one he only had horses on his outside which I think caused him to be a bit slow out,” Vincent said.

He said Strength Of Spirit had showed ability in his trials but he couldn’t be rushed.

“He has been a very slow learner but the owners have been great,” Vincent said. “They have given the horse time and it has been the making of the horse.”

He said Strength of Spirit had a number of idiosyncrasies, but his ability made up for them.

“He is lovely to lead around and do things with but he is an odd horse in that he is probably a bit timid,” Vincent said.

“He won’t go on the track without a mate and he prefers being in the stable rather than an outdoor yard.”

Strength of Sprit has good depth in his pedigree and hopes are high that will train on.

His dam, Scandia’s Star, won three races and was city placed, while his grand-dam Raise A Rhythm was Group Two winner of the Maribyrnong Plate and two other stakes races.

“I am not sure how far he will go but I think he can improve and win more races,” Vincent said.