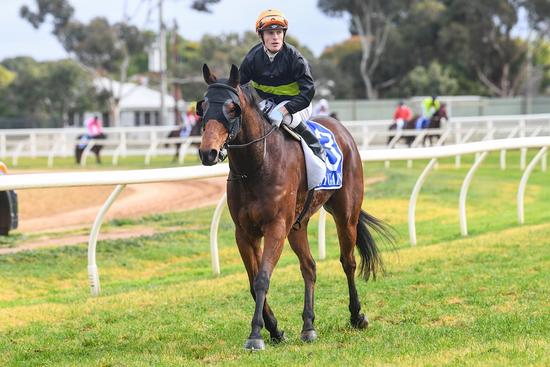 Six-year-old Dodge The Hounds ended a marathon journey to his first win when he broke through at Swan Hill on Monday.

The Strategic Maneuver gelding was having his 28thrace start, and a change of tactics transformed the perennial placegetter into a winner in the Murray Downs Golf & Country Club 4YO+ Maiden (1200m).

Ridden by Jarrod Fry, Dodge the Hounds jumped brilliantly from the gates and rated beautifully in the lead was never headed.

He straightened up 1-1/2 lengths clear and found another gear at the 200 metres, ending the hopes of any challengers.

The most experienced horse in the race, he had started more times than all his rival put together and gave them a galloping lesson scoring by 2-1/2 lengths from There For You with Excuses Excuses another 1-1/4 lengths away third.

It was a sweet success as Dodge The Hounds had threatened to win a race for a long time, weighing in 21 times in his first 27 starts, including six seconds and five third placings.

“He’s been such a consistent horse and really deserved the win,” trainer Vincent Malady said.

“The owners have stuck with him and he still managed to earn more than $44,000 in prizemoney without ever winning.”

At Swan Hill, it was the first time Dodge The Hounds had led in a race.

“When he jumped so well and there was no real speed shown by other horses race he just towed Jarrod to the lead,” Vincent said.

“Jarrod was waiting for them to come at him in the straight but he was never going to get beaten.”