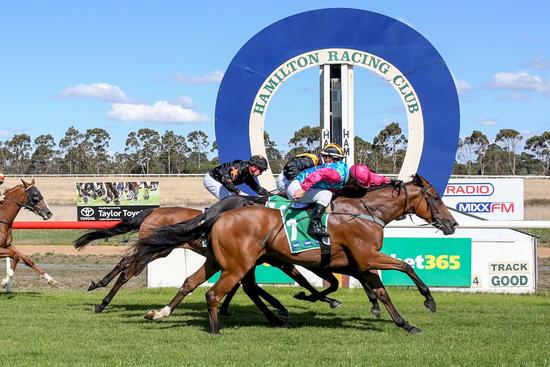 Having only his third race start, the three-year-old lunged to score in a blanket finish from Isola Comacina and Barley Hunter.

While the margin was only a head, the merit of the performance could not be underestimated as Rudy Rude drifted back midfield and raced three-wide, albeit with cover, before jockey Jarrod Fry made ground on him even wider on the home turn.

He unwound his winning run in the middle of the track to score in the last stride.

Trainer Vincent Malady said Rudy Rude had taken longer than anticipated to get to the races and the victory was a deserving reward for his patient owners.

“He’s been slow to pick things up which is why this is only his first racing preparation,” Vincent said.

His sire Zoffany is noted for producing stayers including Moonee Valley Cup winner Ventura Storm and he is the first foal to race from Snip ‘N’ Paste who won four races and placed twice in Sydney city tracks.

“Being by Zoffany you would think he would get over ground and it’s encouraging to see him improve with a gradual rise in distance at each start,” Vincent said

At his race debut Rudy Rude ran on from last to finish midfield at Kilmore on February 27 and last start worked home stylishly to finish fourth at Kilmore, less than 2.5 lengths from the winner Manhattan Sting.

“You would like to think he will get a staying trip which will give him a chance to win a few races,” Vincent said.