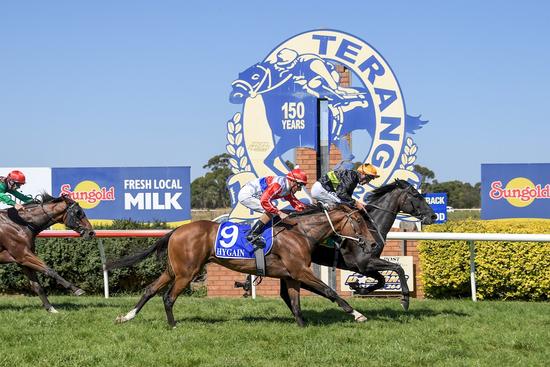 “It is a long time since we’ve had a double and its really pleasing that we were able to get it with these two horses who really haven’t had a lot of luck in their careers,” said trainer Vincent Malady.

Vincent paid tribute to Cameo Lass’s owners who have stuck with the six-year-old who posted her second win in 14 starts.

“It’s really good for the owners to get another win out of her,” Vincent said.

“Normally a horse like her you would retire before now, but the owners really love her.

“She had always had some problems and hasn’t performed well in a lot of races but they have hung in there which is a real credit to them.”

Cameo Lass made the Terang field as the first emergency and after finishing near last when third up at Geelong on January 27, bounced back with a gun ride from Joe Bowditch to score at $21.

The daughter of Bramshaw sat in behind a hot pace and was too strong in the home straight, skipping to a 1-1/2 length lead near 100m and holding off Avoid The Rush to score in a photo finish.

Bowditch said Cameo Lass would have won easier but after hitting the lead approaching the 200m she spotted the winning post and shied out.

“If she had put her head down and really gone on with it, I’m she would have put a gap in them,” Bowditch said.

Owners David Dean and Geoff Wheildon bred Cameo Lass and they race her with friends.

She is the first foal from Choisir mare Tamisra, who cost $10,000 at the 2009 Inglis December Sale, nine days after she won over 1600m in Adelaide.

Cameo Lass’s other win was at Camperdown in January 2018.