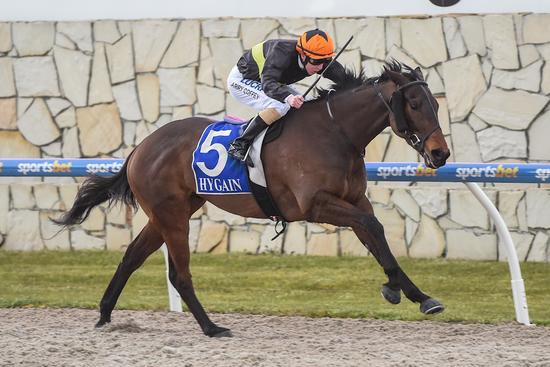 City-placed gelding Royal Enigma raced his way into winning form when he led all the way at Pakenham on Tuesday.

“A few niggling problems” had hindered the gelding’s fitness this campaign but he was back to his best dominating the Red Gem Packers BM58 Hcp (1200m).

“The owners have been very patient with him,” said trainer Vincent Malady who has shared their frustration.

“He’s been in work a long time but we just haven’t been able to get him right.”

Royal Enigma contested 1000-metre races earlier in his campaign to compensate for his lack of fitness but was caught in traffic jams being ridden off the pace.

“He was getting caught back in the ruck a bit over 1000 metres and not really stretching to that well,” Vincent said.

Three starts ago Royal Enigma had a gut-buster when he led over 1200 metres at Geelong on July 28 but since that run hasn’t looked back.

“At Geelong, he stretched out well early but faded a bit late,” Vincent said.

“He took a long time recover because his fitness wasn’t quite right to be sitting on the speed over 1200m but his fitness improved a lot for his next run at Pakenham when he finished second.

“He led there and was in the finish for a lot longer, and then today (Tuesday) he was stronger again.”

Tanto Bianco set out after the son of Casino Prince but the chase was futile and Royal Enigma scored comfortable by 1-1/2 lengths.

He has now won two of his 20 starts but he has been an unlucky horse finishing second seven times, including once in a BM64 at Moonee Valley in November last year.

“He showed good form last preparation and hopefully he can stay competitive when he goes up in class from here,” Vincent said.